On a morning safari in the BRT Wildlife Sanctuary, I spotted a small bird, bright yellow in colour, hopping around a fallen tree. Closer examination revealed that it was indeed the Grey Wagtail – a bird that comes down from the Himalayas each year, to spend its winter months in the relatively warmer forests of South India. The arrival of Grey Wagtails flags off the onset of winter in the jungles of Karnataka.

The sun hangs low, days get shorter, temperatures drop with mist and fog draping the forests at dawn.

A herd of Spotted Deer

Winter is here, scattering blue hues all over the jungle, adding more mystery to an already surreal world.

A tigress and her cub out on a stroll

Sensing the shorter days and a decrease in the sun’s intensity, some deciduous trees shift gears into a different mode of functioning. The leaves don hues of orange before they turn a pale yellow and are then shed. Photosynthesis is shut down and the tree will survive the winter on reserves until spring arrives.

A Grey Langur basks in the sun

For photographers, winter is a very interesting season. The light is soft and has a golden tinge to it, especially during the first and last hours of sunlight each day.

On rivers and water bodies, a type of fog, called evaporation fog, forms when cold air moves over warmer water giving the appearance of steam rising out of the water.

As the fog clears over the river, the sun shimmers through, rendering some of the prettiest bokeh in photographs.

Winter safaris are all about driving through the forest on chilly mornings, with a few extra layers of clothing, waiting for the sun to come out and then soaking up its pleasant warmth, just like this scops owl.

The Many Morphs of the Malabar Pit … 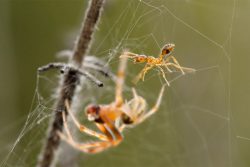